You are here: Home / Projects / Integration via Education

2019, Düsseldorf / Germany
Education as a key to integration

Education as the key to integration – To this end, the Fritz Henkel Stiftung launched an extensive program for refugees in Germany. In cooperation with Henkel, external partners and the authorities, the refugees were offered vocational orientation and internships, work placements, language programs lasting several months and coaching.

The aim is to promote the integration of people with high prospects of remaining in Germany at all levels. The integration programmes, in which more than 210 people have taken part so far since 2016, specifically promotes vocational orientation, especially for young people and young adults, through practical experience.

In addition, the foundation has also helped where it was most needed: in the initial accommodation and residential facilities. To this end, we worked together with cross-regional aid organizations such as the German Red Cross, Caritas, Diakonie and Arbeiterwohlfahrt. Among other things, the foundation donated washing machines and dryers for refugee accommodation in Düsseldorf, Hamburg and Heidelberg. 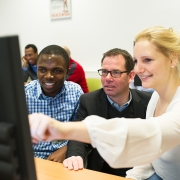